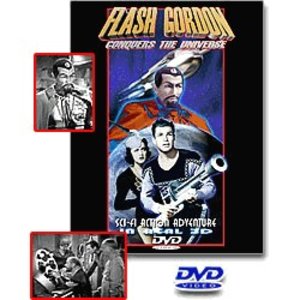 Add to wishlist Add to comparison
3 DVD SET! Over 240 Minutes!

A horrible plague that threatens global extinction strikes the earth! "Purple Death," called by earth scientists, is believed to be created by the evil villain Ming, the emperor of Mongo, and nemesis of all earth people. Earth leaders are convinced that this is one of Ming's deadly plans to overtake the planet.

The only hope for the planet Earth is Flash Gordon. With the help of his beautiful companion Dale Arden and the genius scientist Dr. Zarkov, Flash and his companions take off to the planet Mongo to confront the evil Ming and stop his plans of destruction. Will Flash succeed or will Ming finally overtake earth and succeed in interplanetary conquest...
0 stars based on 0 reviews Add your review