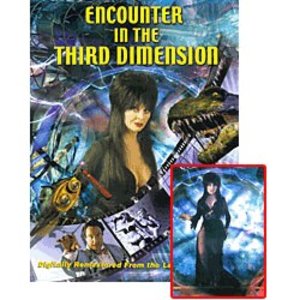 Zet op verlanglijst Toon in vergelijking
Join Elvira - Mistress of the Dark in the 3rd dimension...

Join Stuart Pankin and Elvira - Mistress of the Dark on a groundbreaking venture into the realm of 3-D filmmaking, where captivating computer generated imagery mixed with live action thrills abound. Encounter early incarnations of the third dimension, from a recreation of one of the earliest 3-D movies ever made to classic clips from Hollywood's 3-D heyday during the 1950's to modern creations such as James Cameron's theme park attraction, Terminator 2: 3-D.

Experience the wildest 3-D adventure ever created for the giant screen! "In an era of eye-popping digital effects, it's easy to feel like you've seen it all before. Encounter in the Third Dimension... is proof that you ain't seen nothin' yet!" -- Newsweek

Encounter in the Third Dimension